skip to main | skip to sidebar

A couple of days ago we paid for a trip out to Litchfield park and to the Adelaide river to see crocodiles.  In Litchfield was some nice waterfalls and some pools we could swim in.  Also lots of termite hills, see pictures. Yesterday we had a four hour briefing from the rally organizers.
This blog, as throughout Australia, describes all Indonesian anchorages we used and their waypoints.

We are planning to leave Darwin in two days, that is this Friday morning.  As soon as we clear customs and get our Indonesian cruising permit we will be off.  We are leaving a day before the official start of rally so we do not have to sail at night with so many boats around and also not be one of the last boats into Kupang as we are one of the smallest in the Rally.  The weather forecast is looking good with a good sailing breeze from the SE.  We will be leaving the modern western world for foreign cultures of Asia, and will be seeing the Muslim world for the first time.
Indonesia has about 230 million people and is the largest Muslim country in the world.  This will be the last blog update until we get to Kupang on Timor our first stop.  That is if we can find descent Internet service.  We figure it will take us about 4 days to do the 450 miles.  There is about 70 other boats in the Rally and after Kupang a lot of the boats will go their own way.  The Rally takes care of the complicated paper work that you would have to do if you went on your own, and also we don't have to pay the boat bond with the rally.
Posted by Tagish at 3:56 AM No comments: 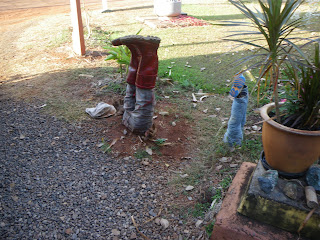 Labels: having a bad day 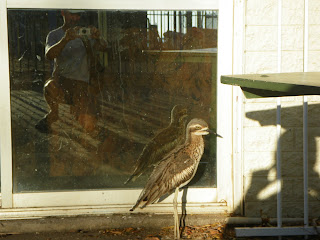 Posted by Tagish at 3:17 AM No comments:

Labels: This bird spends lots of time looking at it's reflection 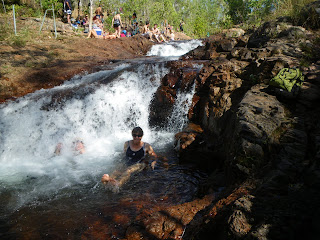 Posted by Tagish at 3:14 AM No comments: 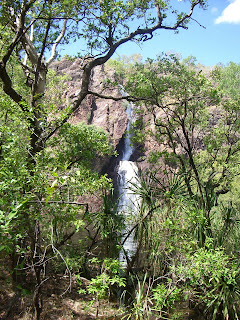 Posted by Tagish at 3:12 AM No comments:

Labels: One of the falls in Litchfield Park 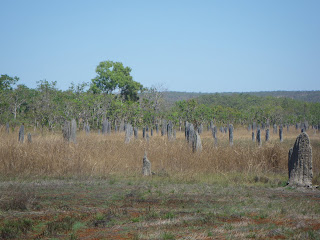 Posted by Tagish at 3:10 AM No comments: 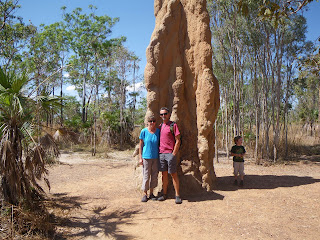 Posted by Tagish at 3:08 AM No comments: 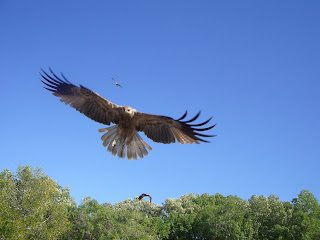 Posted by Tagish at 3:06 AM No comments: 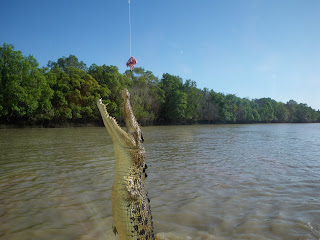 Posted by Tagish at 3:03 AM No comments: 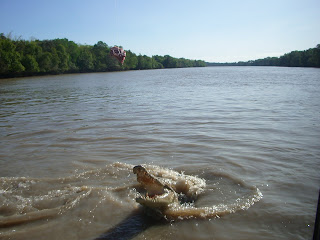 Posted by Tagish at 3:01 AM No comments:

Labels: lets get out of here 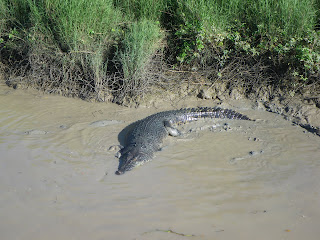 Posted by Tagish at 2:58 AM No comments:

The time has been flying by, only 12 days before we are off to Indonesia and a different world.  We have been running around doing paper work, for example just made 30 copy's of our passports and boat registration, Visa's and crew list, that's 30 copies of each!  Got our Visa's from the Indonesia embassy which took two trips there.  Printing out a couple of books on Indonesia we were given e-copies of.  Stocking up on food items hard to get in Indonesia.  Also trying to get some sight seeing in around town as well.

There is also a fair amount of socializing that takes up time. We are renting a car in two days with Chad and Kelli of Just Magic to get the propane tanks filled and few other items that are hard to do on foot or bike. Have not had too much work to do on the boat as we did it all down in Manly and Bundaberg,  Just changed the engine oil and a few other small items. Also visited the local museum by the Darwin sailing club.  It has a large stuffed crocodile called Sweetheart that used to knock over small boats, very impressive.
Once we are in Indonesia the Internet there is very slow and intermittent so blog updates may be few and far between until up to Singapore and Thailand area.
Posted by Tagish at 5:00 AM No comments:

Posted by Tagish at 2:57 AM No comments:

Labels: Sunset near Darwin
Posted by Tagish at 2:56 AM No comments:

Labels: Wessel's red rocks
Posted by Tagish at 2:54 AM No comments:

Labels: Brian poking at little termite hill
Posted by Tagish at 2:50 AM No comments:

Labels: Searching for a perfect Nautilus shell
Posted by Tagish at 2:46 AM No comments:

Labels: Croc tracks at Wessels
Posted by Tagish at 2:45 AM No comments:

Labels: Border patrol buzzing boat
Posted by Tagish at 2:43 AM No comments:

Cape Wessel to Darwin--We made it!!

It was finally time to leave Cape Wessel, a very remote and beautiful spot. The next morning, June 24 we left for Port Essington 270 miles away.  Some people stopped at Oxeley island and  found it a good anchorage, you could also anchor in the lee of Cape on Crocker Island.  These were backups if we could not make Port Essington before dark on the third day.
We left Cape Wessel after a leisurely breakfast and had great sailing right out of the bay.  It was a cloudy day but we had 20 knot winds on the beam.  By late afternoon the seas were large and confused making for a more uncomfortable trip that the Gulf of Carpentaria.  For a while during night we had 3 reefs in main and then the winds eased and the seas calmed.  We now had full sail up  and going along slowly.  The next night was a light wind night and then wind picked up a bit in morning and we sailed all but the last 45 minutes to our anchorage at Berkley Bay in Port Essington.  There were pearl nets strung in rows just before the anchorage so don't come in at night as you would definitely hit them.  We dropped anchor in 22ft at 11 14.082S   132 11.363E.  There is a nice long sand beach which we took a walk on with a crocodile river at one end and some rock cliffs at other.
I also fixed the rope I used to attach the third reef to its hook on the mast as it was catching on the mast steps and and stopped the sail from dropping properly.
We left the next morning to do the 35 miles to Alcaro bay a mile or two before Cape Don.  From here we would be in good position to catch the tides to get to Darwin.  It was a light wind sail all the way and we had to motor the last few miles.  We are now getting out of the steady trade winds as we curve down into Darwin.  We anchored in 22ft in Alcaro Bay, did not get the coordinates as were immediately invited over to  the yacht Haven along with the crews of several other yachts.  It was a late dinner that night.
We were up next morning at 2:30AM  to catch the tides which runs strongly through Dundas strait and also to complete the 60 miles to Cape Hotham.  We were under way by 02:45AM  and were soon flying along at 8 knots in the current, 2.3 knots faster than normal.  After an hour the current slowed a bit  but we were still going good with a great sailing breeze just forward of the beam.  A couple of the other yachts did not want to get up before daylight and just used their engine to power against the current which was now against them.  It would be tough for us to do that with our smaller engine, besides 8 knots is a lot more fun than the 2.5 we would have been slowed to, and it is not good seamanship.
We sailed all but the last 6 miles to Cape Hothman as the wind totally disappeared.  We motored to a notch in the coast a few miles south of the cape. and anchored in 18 ft at 12 05.972S   131 15.608E.   If there was a lot of wind it might have been better to go further in to Adams Bay near bottom of Cape. But we had a quite night and did not go ashore as was just all mangrove.  Darwin 40 miles away.
The next morning we were off  at 08:45 to catch the tide through Howard channel which can run strongly.  It was a fast ride through here and to where we turn South on the final 15 mile stretch to Darwin.  We now had no current either way and no wind so motored all the way to our Fannie Bay anchorage off Darwin.
We anchored in 24ft near high tide allowing for the 20 ft tides here.  We made it!! 2000 miles done.  We are at  12  25.525S   130 49.189E.
We were going to go into Tipperary marina for a week but they wanted more Liability insurance than we had and it would cost $200 for a local company to increase it.  So we said forget it and are going to stay in Fannie  Bay until the departure date July 23.

I have never seen a good description of Fannie Bay so here it is.   Boats with a 6ft draft or more are anchored about a .7 to.8 miles offshore per my chartplotter. So far wind and waves have not been a real problem, in morning the wind has been blowing from SE and then in afternoon a North orNW wind comes in bay, the first 2 days were fine and then the third day was a bit bouncy for a few hours in afternoon. (added later, some days it does get fairly bouncy for a few hours, but always dies at night.) It is not nearly as bad as we thought it would be to get ashore with dinghy.  There is a sand beach in front of the Darwin yacht club where you land your dinghy to the side of the sailing dinghy launching ramps.  If the tide is down it is about a 50 meters further to walk and it is all sand not mud. Not the huge mud flats I had heard about.  Though on spring tides it might be another 50 metere as beach flattens out.  Some people have wheels for their dinghy's to roll up beach, others leave it at waters edge and anchor it.  Others use the dinghy trolleys available in the yacht club that the dinghy sailors use.  We just carry ours up as it is a soft bottom and fairly light or use the trolleys if tide way out.  We went up to the Darwin sailing club our first day there and they give you a temporary membership for $10 dollars a week and this gives you use of the showers and laundry and there is water tapes and garabge drop off there too.
The town center is a 50 min walk away or a $2.00 bus ride and ticket is good for 3 hours.
We got our info packet from Lidia for the Indonesia Rally today and also got lots of shopping done and exploring.
Posted by Tagish at 5:21 AM No comments: 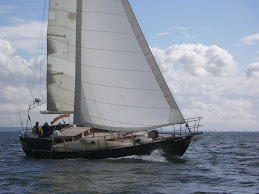 Tagish
Tagish is a 36' Brent Swain design steel sloop with Canadian's, Brian and Dorothy on board. Built using the origami method of folded steel. It has 'keel cooling' using the skeg which holds 10 gallons of cooland/antifreeze like a car and using pump in engine is circulated for cooling. It also uses a dry exhaust for better reliability. So no water brought into boat for engine, no impellors or heat exchangers or sea water strainers to mess up. The anchor windlass is manual only, with 200' of 5/16 hi test chain and 100ft of 3/4 nylon on the drum which is mounted on deck. Tagish is named after a lake in the Yukon, Northern Canada where we had a cabin as children. See 2 short video clips of boat sailing-goto older posts in blog at March 4/2011.